Scroll down for all the News and Headlines, Commentary, Opinion, World News and more.

SAN ANTONIO (AP) — “The driver of a broiling tractor-trailer found packed with immigrants outside a Walmart in San Antonio was charged Monday in the deaths of 10 of his passengers and could face the death penalty.

In outlining their immigrant-smuggling case against James Matthew Bradley Jr., 60, federal prosecutors depicted the trailer as pitch-black, crammed with somewhere around 90 people or more by some estimates, and so suffocatingly hot that one passenger said they took turns breathing through a hole and pounding on the walls to get the driver’s attention.” More here.> Driver charged in smuggling-related deaths of 10 immigrants

In doing so, the president took shots at his own attorney general and at congressional committees investigating Russian interference into the 2016 campaign.” More here.> ‘Lock Her Up’ Reboot: Trump Calls for DOJ to Reopen Hillary Case

Tennessee Judge Gives Inmates Reduced Sentences If They Sterilize Themselves

“A group of 151 conservative Republican congressmen are calling for the Internal Revenue Service to be abolished, calling it an “inefficient behemoth weighing down our economy.”

“At its worst, the IRS has shown a capacity for outright corruption and political targeting,” the Republican Study Committee (RSC) wrote in its budget, released Thursday. “Under the Obama Administration, the IRS illegally targeted conservatives. It has channeled millions of taxpayer dollars away from taxpayer assistance for employee bonuses. It has allowed taxpayer information to be compromised in a data breach. The IRS has even intentionally leaked confidential taxpayer information. This is a blatant breach of trust. The American taxpayer deserves better.” More here.> House Conservatives Set Ambitious Tax Reform Target: The IRS

On July 11, a day before his birthday, the Marine heard someone outside pulling his American flag down. So he went outside to investigate.

“I walked out, hanging onto the railing, and stepped down. That must’ve startled them,” Banks said.

Banks said the first time this happened, about a year ago, someone shredded his American flag and ripped his Marine flag. He was determined not to let that happen again.

“They could see me. I couldn’t see them. I turned and looked in the other direction, and about then – wham! One of them knocked me down,” Banks said.” More here.> Veteran, 92, attacked while protecting his flags

HONOLULU (AP) — “The father of a 6-year-old Hawaii boy who disappeared two decades ago was sentenced Monday to 20 years in prison for manslaughter, fulfilling a deal with prosecutors that required him to reveal the location of his son’s body.” More here.> FATHER OF HAWAII BOY MISSING FOR 2 DECADES IS SENTENCED

ST. LOUIS (AP) — “Authorities say a carjacking suspect died Monday after a shootout with police on a busy stretch of interstate near St. Louis.

The incident began around 9 a.m. when a vehicle ran off the road near the intersection Interstate 55 and Interstate 270. When someone tried to help the driver of the wrecked vehicle, he allegedly pointed a gun and demanded that person’s car, St. Louis County police spokesman Shawn McGuire said.” More here.> SUSPECT DEAD AFTER SHOOTOUT WITH POLICE ON I-55

The Navy said on Friday that CVN 75 departed the shipyard a day earlier than expected.

“The real reason we’re in this mess on health care is because it costs too much.” Swamp Watch: Healthcare and pharmaceuticals

“Hundreds of desperate patients, some in their 90s, traveled miles to be seen to by doctors offering free care.

Pictures show rows of people lying in beds being treated by doctors walking on dirty tarmac in Wise, Virginia

Charity workers said the scenes were like something they would expect to see in South Sudan or Haiti” More here.> Fairground becomes a makeshift hospital

July 24 (UPI) — “Electronics giant Samsung made its first foray into U.S. pharmaceuticals Monday when it joined efforts with Merck to release a lower-cost version of a rheumatoid arthritis drug.

UNITED NATIONS (Reuters) – “United Nations Middle East envoy Nickolay Mladenov warned on Monday that a solution was needed by Friday to the Jerusalem mosque crisis, which he said threatens to have “potential catastrophic costs well beyond the walls of the Old City.”

Israel installed metal detectors at entry points to Al-Aqsa mosque in Jerusalem after two police guards were shot dead on July 14, triggering the bloodiest clashes between Israelis and Palestinians in years.

Incensed at what they perceive as a violation of delicate decades-old access arrangements at Islam’s third-holiest site, many Palestinians have refused to go through the metal detectors, holding street prayers and often violent protests.” More here.> U.N. warns of escalation if no Jerusalem mosque solution by Friday

JERUSALEM/AMMAN (Reuters) – “An Israeli embassy security guard shot dead a Jordanian who stabbed him with a screwdriver in the Amman mission compound in an incident in which a Jordanian bystander was also killed, Israel said on Monday.

The incident on Sunday night has tested already tense relations between Israel and Jordan, one of two Arab states with which it has peace treaties. Jordan wanted to question the guard, who was slightly hurt, but Israel said he had diplomatic immunity and should be repatriated.

Israel’s foreign ministry said the security officer had acted in self-defense when he shot his attacker, a workman at the embassy compound. His father said he was a 16-year-old with no militant links.” More here.> Israel cites self-defense in Amman embassy shooting

SCHAFFHAUSEN, Switzerland (Reuters) – “A chainsaw-wielding loner who mostly lived in the woods stormed into an insurance office in a Swiss town on Monday, wounding two members of staff and three other people before fleeing, police said.

Police put the center of Schaffhausen into lockdown and launched a manhunt for the suspect they identified as 51-year-old Franz Wrousis. They said the assault was “not an act of terror”, but also not random.” More here.> Chainsaw attacker targets insurer in Swiss rampage, still on run

A suicide bombing killed at least 22 people in Pakistan 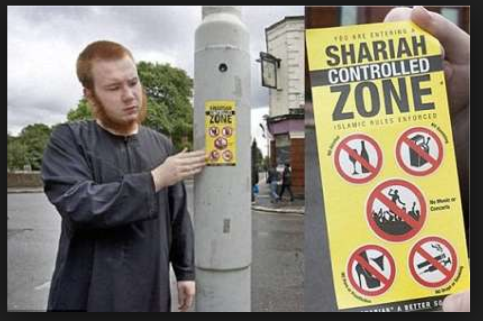 “The action pictured above is also happening in certain areas of the U.S.
The sheer size of America dilutes the impact overall, but in areas where it does take place, it is most definitely felt. The difference between Europe and most of America is that in the U.S., the “authorities” can attempt to cover up Islamic crimes for so long without irate push back from the citizenry.
Also, all over America, angry parents are challenging the teaching of Islam in the public schools that goes far beyond a historical context and plunges into outright religious indoctrination.

There are flabby brained local American officials who try desperately either out of ignorance, Dhimmitude, or treachery, to counter any so called Islamophobia. Many of the new migrants feel they have the right, indeed the obligation, to harass, beat up, and rape non Muslim women, children and even men. Demands by the public for the effective dealing with such Islamic crimes are met with derision and/or incalcitrance by many local governing bodies.” More here.> Sweden drowning in the rapids of its nonplussed leadership’s bafflement and/or betrayal

“Did you know that U.S. businesses are taxed at one of the highest rates in the developed world? How bad is it? And why should you care? Watch this short video to find out.” Taxes Are Killing Small Businesses

U.S. home sales down in June, with decline in available properties

Contractor support will include engineering, manufacturing development and production work for the SDB II with work being performed in Tuscon, Ariz. The completion date for the contract is July 25, 2024.” More here.> Raytheon receives $75 million Small Diameter Bomb II contract

“Let’s get this out of the way right now: Yes, Kid Rock can absolutely win if he runs for U.S. Senate in Michigan. He will be in first place to win the GOP nomination within a week of entering the race, and instantly be a tossup to defeat Democrat incumbent Debbie Stabenow.

When Kid Rock first tweeted about running for Senate, political watchers rushed to proclaim that he was not serious about running, and that even if he were, he could not win the nomination, much less defeat the better-funded, more disciplined Democrat.

It’s hard to overstate the place Kid Rock holds in the consciousness of a certain segment of blue-collar Michigan voters. He is Detroit. He has made his quite lucrative career out of celebrating Michigan in general and Detroit in particular. He embodies the “Detroit vs. Everybody” mentality that defines southeastern Michigan. His “American Bad Ass” brand is tailor-made to appeal to a state and city that resent the contempt they feel from elitists around the country, while celebrating the overlooked virtues of the city and state. That’s an easy message to sell in a campaign.”

“Kid Rock starts out with an advantage in the Detroit area that no other Republican has ever enjoyed. He is a matchup nightmare for Debbie Stabenow and I promise you, she knows it.” More here.> How Kid Rock Can Win Michigan’s 2018 Senate Seat

Healthcare: USA ranked 37th in world. Time for a revolution.