Tax season could have some complications this year, between the prospect of a government shutdown and the 2017 data breach at credit reporting agency EquifaxEFX,

A partial government shutdown may happen for the first time since 2013 if Republicans and Democrats cannot agree on part of a bill related to the Deferred Action for Childhood Arrivals Program (DACA). If the bill does not pass before Saturday morning, some government agencies, including the Social Security Administration and Internal Revenue Service, could “furlough” or temporarily put on leave, some of their employees.

During the shutdown in 2013, which lasted 16 days, more than 90% of IRS workers were furloughed, which resulted in delaying some $2.2 billion in refunds to individual taxpayers.

Bandits take off with money, chips from Vegas casinos

LAS VEGAS — Bandits have gotten away with cash and chips from four casino-hotels in Las Vegas since last week, leaving police on the hunt for multiple suspects.

Three of the casinos targeted by criminals are on the Las Vegas Strip and the fourth one is in the vicinity. The string of incidents comes less than two months after a man wearing a wig and facial bandages robbed the poker room casino cashier of the Bellagio casino-hotel.

A man on a CTA Red Line train doused another passenger with an unknown liquid then set a small fire on the train car in Uptown on Thursday, according to witnesses and authorities.

Leora Arsers, 26, was riding in a crowded southbound Red Line train car a little after 5 p.m., headed to her Lakeview apartment, when a man seated across from her — without saying a word — splashed her with liquid from a water bottle, she said.

“He flung some sort of chemical on me,”

Fahad Saeed was sentenced Thursday to 25 years in prison after he admitted to killing his ex-wife and burying her remains in front of their 3-year-old son.

The 28-year-old green card holder and Iraqi national expressed no remorse for killing his former wife in the Cleveland, Ohio courtroom.

“Things happen,” Saeed told the court through an Arabic interpreter just before a judge imposed his sentence for pleading guilty to involuntary manslaughter, kidnapping and burglary charges.

A Texas astronomy professor has been suspended after his students fled his lecturer in terror when he covered his face and started incoherently lecturing about Islam.

Scared students at Tarrant County College in Fort Worth called the police after lecturer Daniel Mashburn started rambling about connections between the Koran and the stars while reaching into his pocket. 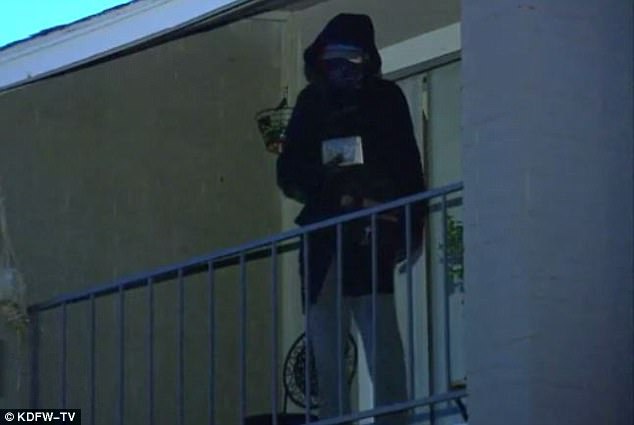 When a KDFW-TV reporter approached Mashburn at his home, the professor refused to come down from his second-floor balcony

People in the class said he turned up 20 minutes late and then turned off the lights. At the time, he was wearing a baseball cap, a toboggan (knit cap), a scarf over his face, and gloves, according to KDFW-TV.

An audit on the screening practices of known or suspected terrorists made by Immigration and Custom Enforcement (ICE) showed non-compliance with proper protocol in every file that was checked, The Washington Free Beacon reported.

The audit was made by the Department of Homeland Security (DHS) as a follow-up to 2011 recommendations made by the department for screening aliens who maybe terrorists.

Of the 40 case files surveyed, DHS auditors found that all 40 cases had at least one instance of noncompliance with the Known or Suspected Terrorist Encounter Protocol (KSTEP). The cases sampled occurred during the Obama years, between 2013-2015.

Investigators have still not discovered what motivated Stephen Paddock to embark on the worst mass shooting in modern U.S. history but determined that he researched SWAT tactics ahead of the massacre and investigated other possible targets, including the famed California beach in Santa Monica, officials said Friday.
Paddock’s online searches before the shooting included research into SWAT tactics and for other potential public venue targets – and he took photographs of some potential sites, the sheriff said. The searches also included the number of attendees at other concerts in Las Vegas and how many people go to Santa Monica’s beach.
During the Friday press conference, Lombardo also revealed that police are investigating a person of interest, who is not Danley. Lombardo reiterated, however,

Tennessee is poised to go through with its first execution in nine years as three death row inmates are scheduled to be executed in 2018, the Tennessean reported Thursday.

The hiatus has been partly due to the lengthy appeals process for death row inmates as well as a lack of drugs for lethal injections, according to the Tennessean. Now, however, the state has secured the necessary drugs and at least one of the three offenders is running out of possibilities for his appeals process.

Telling attendees that the pro-life movement “continues to win hearts and minds.”

Speaking from the White House, Pence assured the marchers that President Donald Trump is the “most pro-life president in American history” and promised that the Trump administration will continue to protect unborn children.

Paul Ryan: ‘The pro-life movement is on the rise’

House Speaker Paul Ryan declared during the annual March for Life rally in protest of abortion that “the pro-life movement is on the rise.”

His remarks, during the 45th annual March for Life Rally in Washington, D.C., capped off a week of actions from the Trump administration to offer protections for medical workers who have religious or moral objections to abortion, as well as guidance for states on how to restrict Medicaid funding from going toward Planned Parenthood. Other actions in the first year included allowing employers to opt out of providing contraception for religious or moral reasons and nominating judges that are likely to side with abortion restrictions.

Five Republican senators on Friday urged Senate Majority Leader Mitch McConnell to schedule a vote on a bill that would ban abortion after 20 weeks of pregnancy.

The bill, the Pain-Capable Unborn Child Protection Act, is unlikely to pass because it will need at least 60 votes in the Senate and does not have enough votes even if all 51 Republicans were to support it. But anti-abortion activists have urged leaders for a vote because they want to have senators on the record with their vote ahead of the midterm elections.

The administration is rescinding an April 2016 letter that the Obama administration sent to states warning them that restricting Medicaid funding to Planned Parenthood could violate federal law. Administration officials said Friday it is rescinding the guidance to give states more flexibility over how they manage Medicaid.

A conservative watchdog group on Friday released 78 pages of new Hillary Clinton emails –three of which contained classified information and others that revealed the former secretary of state knew about potential security issues with her private email server.

The State Department turned over the new emails to Judicial Watch as part of the group’s Freedom of Information Act lawsuit, which is on an accelerated schedule of production ordered by U.S. District Court Judge James Boasberg.

(Washington, DC) – Judicial Watch today released 78 pages of new documents from the U.S. Department of State containing emails of former Secretary of State Hillary Clinton sent and received over her unsecure, non-“state.gov” email system. Three of the email exchanges include classified information. The emails also reveal that Clinton had detailed knowledge about the security issues with in her non-State Department email system.

On March 8, 2011, Hillary Clinton sent classified information regarding Bahrain to Justin Cooper, who reportedly had no security clearance, with instructions to show it to Bill Clinton. Cooper was the Bill Clinton aide, who asked State Department IT specialist Bryan Pagliano to build a server for Mrs. Clinton in early 2009 as she started her new job as Secretary of State.

The truth about Trump’s first year

Saturday marks the one-year anniversary of Donald Trump’s inauguration as president – a day some of his critics thought might never come.

On Jan. 20, 2017 it was almost an article of faith for many Democrats and not a few Republicans that it would only be a matter of time before the Trump presidency ended in an indictment or an impeachment.

But despite the Russia investigation by Special Counsel Robert Mueller, despite the unrelenting fury of the princes of the op-ed pages, despite President Trump’s hiring of staff he was forced to fire, and despite his much-criticized tweets, the president is still in charge at the White House. And he appears to be wearing down all but his severest critics.

Democrats and some Republicans want to shut down our government over DACA. Being united doesn’t mean we have to look alike, or come from the same places. It does mean we have to share common beliefs. Our leaders spend most of their time denying this. They’re lying to us.