World News, Politics, Immigration, In The News, Deep State/Government Corruption, Commentary/Opinion. Scroll down for all the latest.

A new cancer vaccine that activates T cells in tumors was found to be incredibly effective in mice, completely eliminating tumors in 97% of the mice tested, Stanford University School of Medicine researchers found.

Members of the “Dancing with the Stars” tour are on the mend after they were caught up in a massive pileup on I-35 in Ames, Iowa, on Monday.

A winter storm snarled traffic and caused dozens of crashes in Iowa, with one of the tour buses used to transport cast and crew for the “Dancing with the Stars: Live! Light Up The Night” tour involved.

An appalling video posted to YouTube last Sunday shows a man make his way atop an intoxicated unconscious woman lying on the ground.

User Chris Haddow shared footage of the incident taking place on a sidewalk along the Las Vegas Strip. 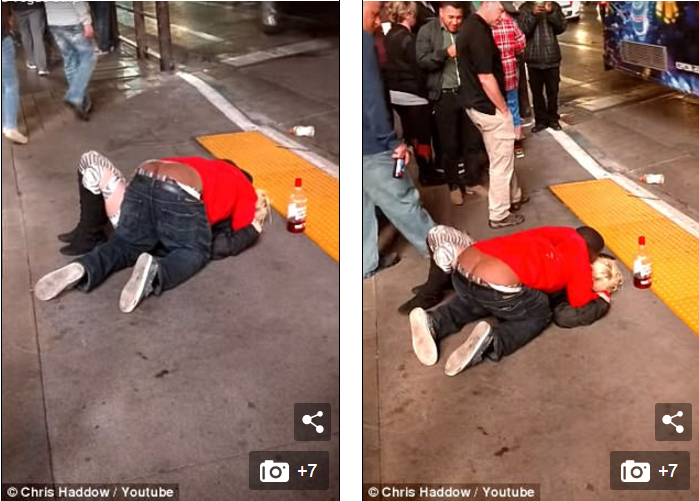 Footage of the appalling incident that happened in in Las Vegas, Nevada was posted to YouTube January 28

The recording, which has been viewed nearly 14,000 times on the video sharing site since it was published, captures the unidentified man heavily kissing the unknown woman as she remains still with her eyes closed.

A Stuarts Draft, Virginia man pleaded guilty today in the U.S. District Court in Harrisonburg, Virginia, for traveling from the United States to Haiti and engaging in illicit sexual conduct with a minor, Acting Assistant Attorney General John P. Cronan of the Justice Department’s Criminal Division and Acting U.S. Attorney Rick A. Mountcastle of the Western District of Virginia announced.

James Daniel Arbaugh, 40, pleaded guilty to one count of traveling in foreign commerce from the United States to Haiti in or about 2016 to engage in illicit sexual conduct with a person under the age of 18.  The defendant will be sentenced on June 13 at 10:30 a.m.

One month after a New Hampshire woman says she chose all six correct numbers for the lone $559.7 million Powerball grand prize, she has yet to turn in the ticket and the money is lying unclaimed. It’s not that she doesn’t want it. She just doesn’t want the public to know she won it.

A Staten Island elementary school cancelled its traditional father-daughter dance because of the Department of Education’s (DOE) new gender guidelines.

PS 65 had the event scheduled for Friday, February 9, until the school’s parent-teacher association realized it would not comply with the Transgender and Gender Nonconforming Student Guidelines, which went into effect in March 2017.

The mayor of Stockton, California announced he’s going to give its poorest residents $500 a month, without any conditions whatsoever in his effort to make Stockton the first American city to guarantee a basic income.
Does this even sound like America? No, this doesn’t sound like America, but it certainly sounds like California. So how will this work? Stockton Mayor Michael Tubbs explained

3rd Colorado officer gunned down in past 5 weeks

COLORADO SPRINGS, Colo. (AP) — A Colorado sheriff’s deputy was shot and killed on Monday, the third officer to be gunned down in the line of duty in the state in the past five weeks.

El Paso County Deputy Micah Flick, 34, was killed while he and other officers were investigating a stolen vehicle in Colorado Springs, about 70 miles (110 kilometers) south of Denver, authorities said.

NEW YORK (AP) — After big moves higher and lower, U.S. stocks are surging Tuesday afternoon, raising hopes for an end to a global sell-off. The sharp swings came one day after the steepest drop on Wall Street in 6 ½ years.

Major indexes in Asia and Europe fell following Monday’s 1,175-point drop in the Dow Jones industrial average. Investors remain fearful that signs of rising inflation and higher interest rates could bring an end to the bull market that has sent stocks to record high after record high in recent years.

WASHINGTON (AP) — Forty-five billion dollars. That’s how much the Pentagon says the Afghan war is costing American taxpayers, and with no end in sight they may have to keep footing that bill for years to come.

Lawmakers, skeptical about the prospects of victory, grilled the Trump administration Tuesday on the direction of the nation’s longest-running war, now in its 17th year. The Senate Foreign Relations Committee hearing comes after a wave of shocking militant attacks in Kabul that killed more than 200 people.

The Department of Justice announced today that Home Furnishings Resource Group Inc. (HFRG) has agreed to pay $500,000 to resolve allegations that it violated the False Claims Act by making false statements on customs declarations to avoid paying antidumping duties on wooden bedroom furniture imported from the People’s Republic of China (PRC).  HFRG, which also operates under the name Function First Furniture, imports, among other things, bedroom furniture that is sold for use in university student housing.  The company is headquartered in Hermitage, Tennessee.

Gavino Rivera Herrera, Luciano Vega Martínez, Alfonso Gonzalez Nevarez, and René Garay Rodríguez were convicted after trial in 2017 in the U.S. District Court for the District of Puerto Rico in San Juan.  The jury found that they conspired to rig bids and allocate the market for public school bus transportation contracts in the municipality of Caguas from approximately August 2013 until May 2015. Each was also found guilty of conspiracy to commit mail fraud and four counts of mail fraud for defrauding the municipality of Caguas to obtain contracts for school bus transportation services.

Israeli forces killed a Palestinian terrorist in the West Bank on Tuesday, saying he was the head of the cell responsible for the Jan. 9 drive-by shooting near Nablus in which Rabbi Raziel Shevach was murdered.

Israel had been hunting the final member of the cell. A week after the attack, commandos killed one of the terrorists involved and captured a another in an operation in Jenin.

The Central News Agency reported that the ground floor of the Marshal Hotel in Hualien county had caved in, causing the deaths of the two employees.

It used to be that DC elites at least faked their respect toward whoever occupied the Oval Office.

Senator Chuck Schumer shows why the days of common courtesy towards a sitting president are long gone.

WASHINGTON (AP) — President Donald Trump will decide whether the public will be allowed to read a memo written by House Democrats on its Russia probe. He has until the end of the week to decide whether to allow its release.

White House chief of staff John Kelly told reporters Tuesday afternoon that Trump hadn’t read the memo yet because Kelly said he had just given the president the document and that it was fairly lengthy.

WASHINGTON (AP) — The House passed legislation Tuesday to overhaul how members of Congress and their staffs report sexual harassment on Capitol Hill, a response to reports about the current system’s tangle of confusing guidelines and culture of secrecy.

“From members to staff, no one should feel unsafe serving in Congress,” House Speaker Paul Ryan said in a statement following a voice vote.

Capitol Hill has found itself squarely in the center of a national reckoning over sexual misconduct and gender discrimination in the workplace. Since October, eight lawmakers have either resigned or abandoned re-election bids amid allegations of sexual misconduct. Some members and aides have complained about a patchwork system for reporting offenses and secrecy around settlements paid by lawmakers’ office.

The Latest: Trump blasts ‘stupidity’ of US immigration laws

WASHINGTON (AP) — The Latest on efforts to reach a bipartisan deal on immigration (all times local):

President Donald Trump says the “stupidity” of the nation’s immigration laws is allowing violent gangs like MS-13 to flourish in the U.S.

Trump says thousands of gang members are arrested and deported but that some come back. He says the situation won’t improve until the U.S. changes its immigration laws.

Trump said: “Not another country in the world has the stupidity of laws that we do.”

(February 5, Washington, D.C.) — The resettlement of refugees and asylum seekers in the U.S. costs federal taxpayers approximately $1.8 billion a year, and a staggering $8.8 billion over five years. These expenditures amount to $15,900 per refugee annually, or nearly $80,000 per refugee over their first five years in America – according to a new study released by the Federation for American Immigration Reform (FAIR). Moreover, the enormously costly resettlement of refugees in the United States does little to address the worldwide refugee crisis. The report notes that the United Nations estimates that the world’s current refugee population exceeds 65 million.

I Thought this was a good read and was a timely reminder for myself.

Having Purpose in Trying Times

When everything seems full and prosperous it is easy to coast through life. Whether it is a new job, pay increase, or great relationships, we cling to these high points in our lives. Yet, all these things can cover up where we are at spiritually. I remember when I began my trip through the wilderness of suffering.

I didn’t watch the game but,

Congrats to Eagles whose players never “took a knee” against Nat’l Anthem but whose coach and key players took a knee for Jesus Christ in Super Bowl victory. Nice!