13 Russian nationals indicted for interfering in US elections

A federal grand jury in the District of Columbia on Friday indicted 13 Russian nationals and three Russian entities accused of interfering in U.S. elections.

The announcement came from the office of Special Counsel Robert Mueller.

Florida Gov. Rick Scott called for FBI Director Christopher Wray to resign Friday in the wake of revelations the bureau ignored a Jan. 5 tip about Parkland school shooter Nikolas Cruz, who killed 17 when he opened fire on Valentine’s Day.

The agency said earlier Thursday in a statement that it received a call in January from a person close to Cruz through its Public Access Line tipline to express concerns about Cruz’s erratic behavior and disturbing social media posts.

“It is now clear that the warning signs were there and tips to the FBI were missed. We see the tragic consequences of those failures.

“The FBI in conjunction with our state and local partners must act flawlessly to prevent all attacks. This is imperative, and we must do better. I have ordered the Deputy Attorney General to conduct an immediate review of our process here at the Department of Justice and FBI to ensure that we reach the highest level of prompt and effective response to indications of potential violence that come to us. This includes more than just an error review but also a review of how we respond. This will include possible consultation with family members, mental health officials, school officials, and local law enforcement.

“We will make this a top priority. It has never been more important to encourage every person in every community to spot the warning signs and alert law enforcement. Do not assume someone else will step up–all of us must be vigilant. Our children’s lives depend on it.”

Vice News is known for finding interesting stories and turning them into documentaries. But a new Vice mini-documentary published last week has stirred the racial pot.

The documentary focuses on a travel agency with retreats in Costa Rica that require clients to be non-white women. The reason for the retreats? To get away from white people in the United States.

A former senior United Nations official claimed that U.N. aid workers have raped more than 60,000 people and that the organization employs 3,300 pedophiles.

The claim was made by Andrew Macleod, former chief of operations at the U.N.’s Emergency Coordination Center, in a dossier he shared with The Sun.

Republican Sen. Ted Cruz (Texas) admonished CNN’s Chris Cuomo on Twitter after the anchor accused him of being afraid to appear on CNN in the wake of the Parkland, Fla. school shooting.

On Friday, Cruz responded to Cuomo’s allegations by announcing that on Thursday he had conducted a 15-minute interview with CNN. Cruz said the interview included a discussion of legislation he previously introduced with Senate Judiciary Committee Chairman Chuck Grassley (R., Iowa) to provide $300 million for school safety, gun-crime prosecutions, and mental health. The bill failed to make it through the Senate after Democrats used their filibuster power to kill it.

A McDonald’s employee in Normal, Illinois, reportedly lost a job after swearing at a local police officer who’d stopped at the restaurant for a meal.

A woman who allegedly “screamed” at a mother and her baby aboard a Delta-operated flight has been suspended from her job with the New York State government.

The woman, identified as Susan Peirez by Spectrum News, was removed from an Endeavor Air flight on Feb. 6 following an incident just prior to takeoff at JFK International Airport. She was accused of “screaming” at a woman and her baby and seen threatening to have a flight attendant fired after stating that she works for New York Governor Andrew Cuomo.

Grandmother died after surgeons mistakenly drilled her skull. Her family won’t get a penny.

When Bimla Nayyar dislocated her jaw in January 2012, her family took her to a Dearborn, Mich., hospital for what was supposed to be a routine surgery. But things went horribly awry after doctors wheeled the 81-year-old grandmother into the operating room.

Stephen King Thinks MS-13 Is a Gun. No, Seriously.

The biggest problem that gun owners have with gun grabbers is their near complete and total ignorance about firearms. A fine example:

Last fall, a Mississippi bail bondsman and frequent YouTube vlogger noticed an alarming comment left on one of his videos. “I’m going to be a professional school shooter,” said a user named Nikolas Cruz.

On Wednesday a man named Andrew Pollack was photographed searching for his daughter, Meadow. 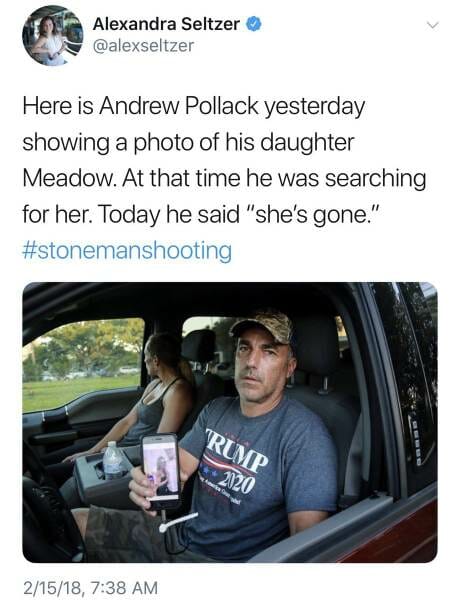 On Wednesday a man named Andrew Pollack was photographed searching for his daughter, Meadow. Seventeen students and faculty were murdered in the mass shooting. Thursday Pollack said, “she’s gone” after finding out his daughter was killed by mass shooter Nikolas Cruz.

Liberals are pure evil. They have zero decency.

Some of the vile insults from liberals include, “I don’t feel sorry for him and f*ck Trump” and “Maybe he should have thought twice before voting for Terrorist Trump”

Earlier today, the Anti-Defamation League and Associated Press reported Marjory Stoneman Douglas High School gunman Nikolas Cruz was a member of the Republic of Florida Militia, a white nationalist group seeking “to create a “white ethnostate” out of Florida.”

Later in the day —  Tallahassee law enforcement says they have not found any ties between Cruz and the group.

A Utah state senator was forced to hide in his hotel room after a persistent young woman appeared at the door and insisted she was his “date.”

Republican state Sen. Evan Vickers told media he was preparing to leave his room at the Little America on Thursday night when the woman appeared, KSTU-TV reported.

Obama did not specify what exact actions he is calling for, or whether they would have prevented Wednesday’s tragedy.

Pentagon issues warning for non-deployable personnel: ‘Deploy or be removed’

The Pentagon on Wednesday announced a new “deploy or be removed” policy that could affect up to nearly 300,000 service members who have been non-deployable for the past 12 months.

Sanchez, 44, of Seattle, Washington, will be sentenced on May 11, before U.S. District Judge Robert S. Lansik of the Western District of Washington.

The Treasury Department has joined in with other key agencies to make good on President Trump’s promise to substantially reduce regulations, targeting nearly 300 Internal Revenue Service rules for the trash heap.

Treasury Secretary Steven Mnuchin said that many of the 298 proposed for elimination have been changed or repealed by laws but are still on the books, creating confusion for taxpayers and corporations.

“We continue our work to ensure that our tax regulatory system promotes economic growth,” he said.

A Republican lawmaker is set to unveil legislation that would make most bonuses given out as a result of President Trump’s tax reform plan tax-free — and took a jab at House Minority Leader Nancy Pelosi with the bill’s name.

Rep. Todd Rokita, R-Ind., has dubbed his bill the “Creating Relief and Useful Middle-Class Benefits and Savings” — or “CRUMBS” Act. Pelosi, D-Calif., famously referred to the bonuses as “crumbs” in criticizing the tax plan last month.

The Senate rejected legislation based on President Trump‘s framework for an immigration deal in a 39-60 vote on Thursday, leaving an uncertain path forward for Congress with nearly a million immigrants sheltered by an Obama-era program facing the prospect of deportation.

The measure spearheaded by Sen. Chuck Grassley (R-Iowa) needed 60 votes to clear a filibuster, but failed to meet the mark.

It was the fourth proposal in a row rejected by the Senate on Thursday afternoon, and it received the fewest votes of support. All three other measures won more than 50 votes.

.@tedcruz: “If Republican majorities in Congress pass citizenship for millions of people, an amnesty, I think it is quite likely we will lose both houses of Congress and Speaker @NancyPelosi will impeach President @realDonaldTrump.” pic.twitter.com/rS0MFx3mGK

Half the country wants to know why the press won’t cover the growing scandal now implicating the Federal Bureau of Investigation and Department of Justice, and threatening to reach the State Department, Central Intelligence Agency, and perhaps even the Obama White House.

After all, the release last week of a less-redacted version of Sens. Charles Grassley and Lindsey Graham’s January 4 letter showed that the FBI secured a Foreign Intelligence Surveillance Act warrant to search the communications of a Trump campaign adviser based on a piece of opposition research paid for by the Clinton campaign and the Democratic National Committee. The Fourth Amendment rights of an American citizen were violated to allow one political party to spy on another.

The top attorney in Robert Mueller’s Special Counsel’s office was reported to the Department of Justice’s Inspector General by a lawyer representing whistleblowers for alleged “corrupt legal practices” nearly a decade before the 2016 presidential election, this reporter has learned. […]

Supreme Court Justice Clarence Thomas said in a rare public appearance Thursday he’s exhausted with how everyone seems to consider themselves a victim these days.

“At some point, we’re going to be fatigued with everybody being the victim,” Thomas, the second African American to serve on the Supreme Court, said during an on-stage interview at the Library of Congress in Washington.

Fox News commentator Tomi Lahren is no stranger to controversy, often wading into the most hotly debated topics of the day with her no-nonsense style. Naturally, she discussed the contentious discussion surrounding the gun debate in the wake of another tragic shooting this week. And while everyone shares a desire to see horrible mass shootings come to an end, there is much disagreement on how to actually do that.

Categories: Immigration, In the News