When a WWII veteran couldn’t walk to his wife’s grave, two volunteers carried him there

Boone, a former B-24 pilot who was shot out of the sky and held as a prisoner of war by the Nazis during his service, traveled to Washington, D.C. from North Carolina on an Honor Flight. Although his wife Alma’s grave deviated from the planned tour, volunteers wanted to make sure Boone could visit his beloved, who was laid to rest in April 2008.

Keziah Daum is not apologizing for wearing what she calls a “beautiful” Chinese cheongsam dress to her high school prom, despite receiving backlash from thousands of people online, some of whom called her a “closet racist” and accused her of cultural appropriation. 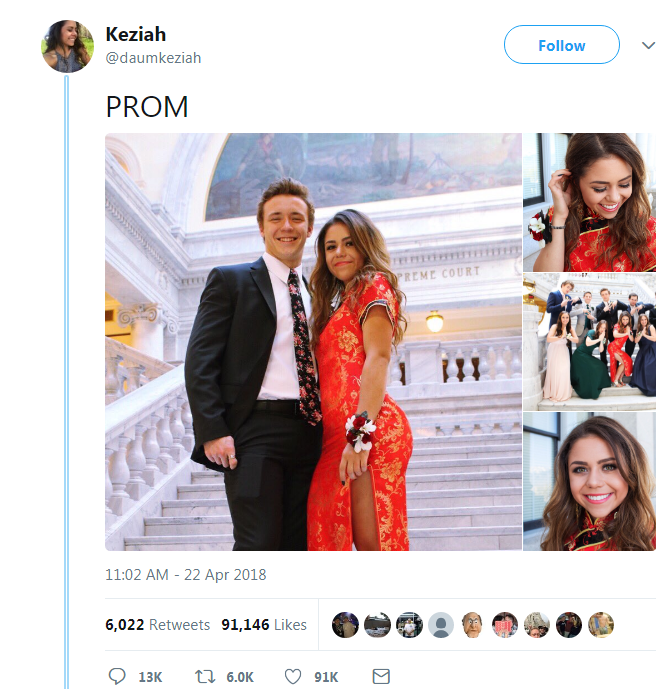 It didn’t take long for the Internet to respond. As of Monday evening, Daum’s post has been retweeted nearly 4,400 times and now she’s fielding hundreds of angry comments.

“Sarah Sanders was smiling. She owned it. I asked her about the attack and she shrugged with a smile and just said the attacks didn’t bother her and that she’s praying for the comedian,” he wrote.

“That is the kind of woman she is,” Johnson added. “Flying into a city to cheap-shot a working mother to her face in front of a room of one thousand journalists because you disagree with her politically is not brave. It’s the definition of a coward and a bully. Putting up with it and forgiving that person afterward? That is real power. That is strength. That is class. That is Sarah Sanders.”

MSNBC Contributor Compares Trump to a Stepfather Who Rapes Kids

Because that’s not at all offensive to Americans who are actually fully grown adults and not children who need parenting from a president.

Or, you know, children who’ve actually been sexually abused by their stepparents.

Fallout: The Hill Drops Out of White House Correspondents’ Dinner

“The Hill, which has participated in the White House Correspondents’ Association (WHCA) dinner for many years, does not plan at this time to participate in the event moving forward,” he wrote. “In short, there’s simply no reason for us to participate in something that casts our profession in a poor light.”

On Monday, Yeezy was back at it, tweeting statements from other people about Republicans freeing slaves and the perils of the welfare state and socialism.

Rep. Maxine Waters was asked by Politico about the rapper’s recent embrace of mainstream conservatism.

She responded by saying that West “talks out of turn” and that he should “think twice about politics, and maybe not have so much to say.”

Deputy Attorney General Rod Rosenstein vowed Tuesday that the Justice Department is “not going to be extorted” after members of the conservative House Freedom Caucus drafted articles of impeachment against him.

“They can’t even resist leaking their own drafts,” joked Rosenstein during remarks at the Newseum in Washington D.C. before adding: “I just don’t have anything to say about documents like that that nobody has the courage to put their name on and that they leak in that way.”

The backlog of court cases addressing the status of illegal immigrant’s has reached over one million, prompting Justice and immigration courts to step up efforts to hire more judges, digitize old paper systems and speed up court proceedings.

While on duty, the agents saw three people attempting to enter the Unites States illegally, through Brownsville, Texas.
The men dropped the bag as they fled back to Mexico.When agents approached, they found an unconscious male tiger stuffed inside.

DHS: More than a dozen known or suspected terrorists try to enter US each day

More than a dozen known or suspected terrorists are trying to get into the U.S. on any given day, Homeland Security Secretary Kirstjen Nielsen told Fox News, citing new internal department data.

“People think of border security in very different ways but to me it’s very simple: border security is national security,” Nielsen said. “What we see at the Department of Homeland Security, we see 15 terrorists either planning to travel or actually traveling to the United States each day, known and suspected terrorists. So that means they are coming through our legal land, port and air but they could be coming across that (southwest) border.”

Former Arkansas State Senator and State Representative Henry (Hank) Wilkins IV pleaded guilty today to conspiring to accept over $80,000 in bribes in exchange for influencing Arkansas state legislation and transactions, including steering approximately $245,000 in Arkansas General Improvement funds to his co-conspirators, and to devising a scheme to conceal the bribe payments as donations to St. James United Methodist Church in Pine Bluff, Arkansas, where Wilkins also served as a pastor.

DC cop, 25, is discovered in a 14-year-old girl’s bedroom by her mother after meeting her on ‘Interracial Cupid’ dating site

A Washington DC officer is now the one behind bars after he was allegedly found in a 14-year-old girl’s bedroom by her mother.

Washington DC cop Nathan Clinkscale, 25, was arrested after he was discovered in a 14-year-old girl’s bedroom by her mother

The girl’s mother immediately called police after she discovered Nathan Clinkscale, 25, in her daughter’s room around 1.30am on Monday.

As California’s homeless population skyrockets, the cost of cleaning up the state’s numerous shanty towns is also hitting record highs — and the price tag is likely to keep rising as workers tasked with tossing the vagrants’ syringes, feces and buckets of urine fight for safer conditions.

The Golden State’s homeless population of more than 130,000 people is now about 25 percent of the nationwide total, and cleaning up after the surging group is getting costly — topping $10 million in 2016-17. But the human cost is getting equally untenable, a workers’ advocate says.

From Fox News: A candidate for a district attorney seat in California is taking heat for saying cop killers don’t deserve the death penalty because “it’s part of the risk [police officers] take.”

Attorney Lawrence Strauss — who made the comments at an April 24 forum for the June Contra Costa County District Attorney election — was criticized by local police union presidents, one of whom said Strauss’ comments were “archaic” and “extremely inappropriate,” The Mercury News reported.

Afghanistan’s first female airplane pilot, who became a symbol of women’s advancement during America’s war there, has been granted asylum in the U.S.

Niloofar Rahmani, a former Afghan Air Force captain, left her native Afghanistan in 2015 to receive training in the U.S.—and to escape death threats directed at her and her immediate family. Now, U.S. authorities have recognized it is too dangerous for her to return home.

Ahead of Facebook’s F8 developer conference, the company announced its new tool to help protect user privacy. A feature called Clear History will help give people more information and control over the data Facebook collects from other websites and apps.

The new feature is built similarly to the way users can clear cookies and history within their web browser. Now, users will be able to do the same on Facebook with a simple control that allows you to clear your browsing history on the social media platform specifically.

Haley ‘taking names’: Report reveals which nations have America’s back at UN – and which ones don’t

When Nikki Haley started as U.S. ambassador to the United Nations, she warned she’d be “taking names” of countries that do not have “our back.” Now, a newly released annual State Department report on voting records at the world body will tell her who exactly is in America’s corner – and who is not.

The report found that U.N. member states only voted with the United States 31 percent of the time last year on resolutions at the U.N. General Assembly – down 10 percent from the prior year. Reacting to the new report, Haley said in a statement that it was not an “acceptable return” on the United States’ investment and suggested this could factor into aid decisions.

Haley emphasized that U.S. taxpayers pay for 22 percent of the U.N. budget – more, she said, than the next three highest donor nations combined. Haley noted that the U.S. cares more about “being right than popular and are once again standing up for our interests and values” but said:

This is the price of letting the mob, even one led by sympathetic teens, rule over sound principles: the loss of Constitutional rights and wrecked budgets.

It’s the dirty little secret largely being ignored. This was not a well-thought-through, studied, principled piece of legislation. And it was not necessary. It would not have prevented Parkland.

Categories: In the News, News