News and Headlines. In The News, World News, Commentary/Opinion,

The skirmish took place Tuesday when a 55-year-old man, identified by police as Sean Turner, allegedly began shouting at other patrons and went behind the counter, WTTG-TV reported. The customer was asked to leave by an employee, but he allegedly threw a punch in response, according to a police report provided to Fox News.

The unnamed 27-year-old employee and Turner then began to fight. In a viral video shared on social media, the employee is seen punching Turner several times in the head. Other employees and customers apparently attempted to intervene as well.

Dallas cop fatally shoots neighbor in his apartment after mistaking it for her own, police say

It was not immediately clear how the officer got inside the apartment or what led to the shooting.

A Dallas police officer returning home from work shot and killed a neighbor on Thursday after she mistook his apartment for her own, police said.

The Dallas Police Department said in a news release on Friday the officer had arrived at her apartment complex in uniform after working a shift. She called dispatch to report the shooting and told responding officers she believed the victim’s apartment was her own when she entered it.

The victim was identified as Botham Shem Jean, 26, FOX 4 News reported. He was taken to the hospital, where he was pronounced dead.

Dallas officer in shooting to be charged with manslaughter

DALLAS –  A white Dallas police officer who said she mistook a black neighbor’s apartment for her own fatally shot that person and will be charged with manslaughter, police said Friday.

It was not clear what the officer may have said to 26-year-old Botham Jean after entering his home late Thursday. But given what investigators currently know about the case, they decided to pursue the manslaughter charge, authorities said.

DAYTONA BEACH, Fla. –  Last Veterans Day, a 60-year-old U.S. Army veteran stopped near his home in central Florida to help what he thought was a stranded motorist. Carlos Cruz-Echevarria was shot multiple times along a Daytona Beach road that night and his truck was found burned miles away.

Volusia County investigators initially thought the slaying was random, that Cruz-Echevarria had been robbed while being a good Samaritan. But the driver turned out to be a hit man who’d been hired to keep him from testifying about a road rage confrontation six months earlier, investigators told news outlets

Sheriff’s officials arrested three suspects in the killing this week and charged each with first-degree murder.

In these photos made available by the Volusia County Dept. of Corrections, Fla., shows Kelsey McFoley, left, Melissa Rios Roque and Benjamin Bascom under arrest, Thursday, Sept. 6, 2018. The three are charged in the death of Carlos Cruz-Echevarria

“I’ve been a cop for 32 years, and this is one of the most heinous, despicable, cowardly acts that I’ve ever witnessed,” Volusia County Sheriff Mike Chitwood said during a news conference Thursday. “You’ve got a pack of animals, (who) once again illustrate that human life is cheap on the street. A road rage incident where a man does what he’s supposed to do, notify the police (and) cooperate with the system. His thanks is to wind up with multiple bullets in his head.”

LEXINGTON, Ky. – An eastern Kentucky disability attorney who masterminded the largest Social Security fraud in history has been sentenced to an additional 15 years in prison for fleeing the country in an effort to avoid prosecution.

Eric Conn pleaded guilty in 2016 to bribing doctors to falsify medical records for his thousands of clients and then paying a judge to approve their lifetime disability benefits.

FILE – In this Dec. 5, 2017, file photo, fugitive lawyer Eric Conn, left, is taken into custody by FBI agents on the tarmac at Blue Grass Airport in Lexington,

His plea agreement would have put him in prison for 12 years, but a few weeks before his sentencing Conn removed his electronic monitoring bracelet and dumped it along I-75 in central Kentucky. He led federal agents on a six month chase that ended in December when he was caught outside a Pizza Hut in Honduras.

Newly released security footage from inside the lobby showed the gunman firing randomly while carrying a briefcase with hundreds of rounds of ammunition over his shoulder.

The footage also showed 29-year-old Omar Enrique Santa Perez walking quickly past a security turnstile Thursday morning just as he was shot by police officers who fired through a plate glass window.

Cincinnati police chief Eliot Isaac said investigators don’t know why Santa Perez decided to open fire in the building that headquarters Fifth Third Bancorp. He never worked there and a search of his apartment did not turn up any answers yet, the chief said.

US to release $1.2 billion in military aid to Egypt

WASHINGTON – Secretary of State Mike Pompeo has authorized the release of $1.2 billion in U.S. military assistance to Egypt, despite human rights concerns that have held up previous funding.

The State Department said Friday it is notifying Congress that Pompeo has signed national security waivers allowing the money known as foreign military financing, or FMF, to be spent. Congress has 15 days to weigh in on the waivers, which were signed on Aug. 21 but not previously made public.

It was not immediately clear why there was a delay in the notification. The money includes $1 billion for the current 2018 budget year and $195 million appropriated for 2017 that would have had to have been returned to the Treasury had it not been spent by Sept. 30.

The North American Aerospace Defense Command (NORAD) stated that two Russian Tu-95 long-range bombers were monitored by U.S. F-22 jets until they flew out of the Alaskan Air Defense Identification Zone. The incident occurred on Sept. 1.

The Russian planes didn’t enter Canadian or U.S. airspace at any point, the statement added.

“As the command designated with aerospace warning and aerospace control mission for Canada and the United States, NORAD monitors all air activity emanating from within an outside North American airspace,” said NORAD in the statement.

The U.S. military launched on Friday a series of war drills dubbed “Defeat ISIS” in Eastern Syria to “hone their warfighting skills for counterterrorism operations” in the region, according to American military officials.

The war drills involved aerial assaults, including a “live fire rehearsal before departing the 55-kilometer de-confliction zone around the Coalition’s At Tanf Garrison,” according to U.S. Central Command. 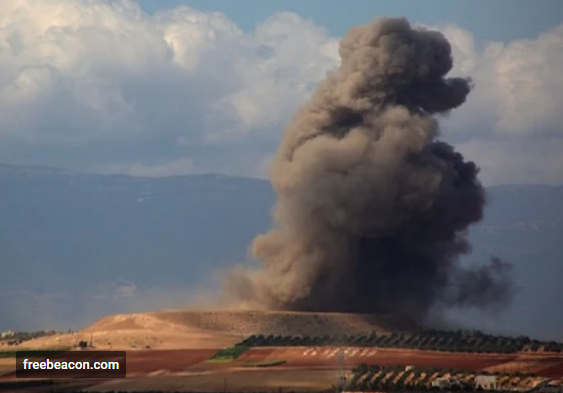 Military officials say the war drills will demonstrate America’s ability to simultaneously strike targets from the air and ground.

The U.S. Army plans to build prototypes in the next several years of a new lightweight Mobile Protected Firepower armored vehicle expected to change land war by outmatching Russian equivalents and bringing a new dimension to advancing infantry as it maneuvers toward enemy attack. 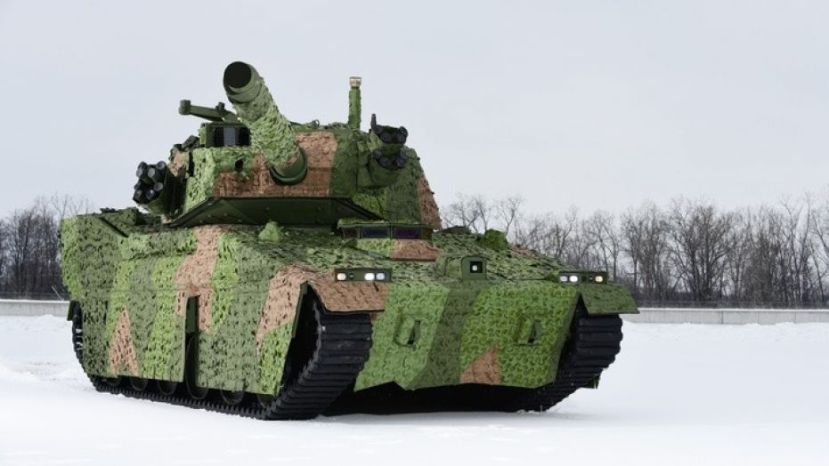 BAE Systems has submitted its proposal to the U.S. Army to build and test the Mobile Protected Firepower (MPF) vehicle (BAE Systems)

The Federal Reserve is a critically important body for the global economy that’s also frequently misunderstood.

So what happens when you visit the biggest video website in the world, YouTube, which is owned by Google, and look for some basic information about the US central bank?

If you thought you might learn about the Fed’s dual mandates for shaping monetary policy, or about the 12 regional banks in the Federal Reserve System, you’d be mistaken.

All you have to do is type “Federal Reserve” into YouTube to tumble into the bizarre rabbit hole.As Hayes points out, this is pretty worrisome if you imagine a student, or any other well-meaning citizen, trying to educate themselves on the topic.

The owner of a  Colorado sporting goods store is putting his money where his mouth is.

In the face of Nike’s new ad campaign with former San Francisco 49ers quarterback Colin Kaepernick, the owner of Prime Time Sports is “just doing it” and liquidating Nike products from his store.

“I’m done with Nike,” store owner Stephen Martin told Fox21 News. “I do not support it, I do not want to write any more checks to Nike. I’m done with them entirely.” 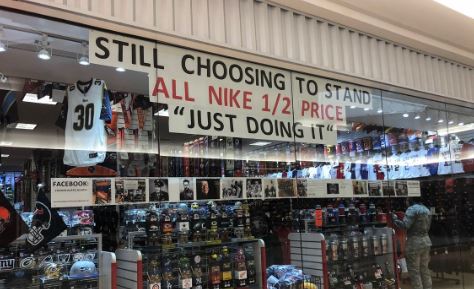 “All Nike 1/2 Price” and “Still Choosing to Stand, Just Doing It,” read the signs at the store located in the Chapel Hills Mall, KRDO reported. Martin is making the choice despite more than half of his inventory being NFL jerseys – all made by Nike.

A report from Morning Consult found that Nike’s favorability has fallen by double digits following the campaign announcement, which prompted some customers to burn their Nike gear.

“Before the announcement, Nike had a net +69 favorable impression among consumers, it has now declined 34 points to +35 favorable,” Morning Consult stated. Additionally, before the announcement, 49 percent of Americans said they were either “absolutely certain” or “very likely” to buy Nike products. That number declined to 39 percent post-campaign.

Former President Barack Obama launched his return to the campaign trail Friday with a fiery speech accusing President Trump and the GOP of fueling “division and resentment” — but the sitting president responded with a yawn.

The back-and-forth between the sitting and former presidents sets the stage for a battle of the mega-surrogates heading into the November midterms. Trump has promised to ramp up his campaign appearances for GOP candidates and, with Obama flexing his political muscle once again, he will have a worthy competitor.

MINSK, Belarus — About 4,000 children have been evacuated from a town in Russia-annexed Crimea where a noxious chemical leak has been blamed on a local titanium factory.

Residents of Armyansk complained in late August that a sour smell was pervading the community and a substance resembling rust had fallen on roofs, trees and vehicles.

Authorities this week decided to take children away from the town of 20,000 people for two weeks. They say the children are being housed at health resorts elsewhere in Crimea.

Russian media have not reported widespread illness or symptoms in Armyansk. The head of Ukraine’s adjacent Kherson region said Friday that 37 border guards have been hospitalized due to negative effects from the leak.

The Thessaloniki police department said more than 4,000 officers will be on duty in the northern city Saturday, when Tsipras plans to outline his economic platform for a country emerging from a decade of international bailout measures. Many previous protests at the annual trade fair turned violent.

U.S. security personnel were helping with the event because Commerce Secretary Wilbur Ross is in Thessaloniki with a delegation of executives from more than 50 American companies. Ross met Tsipras Friday and said he was encouraged by Greece’s developing financial recovery.

I am touring the ICE immigration center in Florida….YES children are being mistreated. EVERYONE PLEASE RETWEET!

I am touring the ICE immigration center in Florida….YES children are being mistreated. EVERYONE PLEASE RETWEET! https://t.co/EwuySMmqKD

Opinion: How We Can Defeat the Silicon Valley Socialist Media Dictatorship

If Twitter shadow bans your tweets or Facebook denies you service at their lunch counter to share your deplorable posts with your friends, or Google’s algorithms declare you a non-person like one of the authors of the Declaration of Independence, you have standing to sue, under the Sherman Antitrust Act or the Clayton Act.

Conservatives shy away from that because “antitrust” sounds like government regulation and they don’t want to be suing for a government breakup of successful companies. And besides, even the Silicon Valley Socialist Dictatorship is protected by the First Amendment. But that is all just unilateral disarmament, in the face of oppression by the Silicon Valley Socialist Media Dictatorship.

Tagged as: Commentary/Opinion, In the News, World News