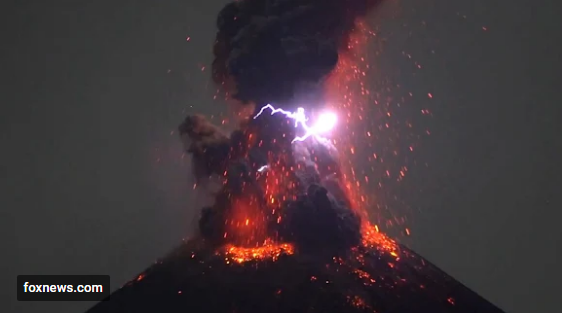 Krakatoa. It’s a name you’ve probably heard before. It’s a volcano. And when it blew in 1883, it sent shockwaves around the globe. Now, it’s erupting again.

It’s not the beast it once was. But it is producing some rare effects.

A new mound of ash and lava has been steadily growing in the caldera left behind by the enormous explosion which killed some 36,000 people through its thermal flash and ensuing tsunamis.

It was so loud it was heard for thousands of kilometers. The effects of the gas and dust it pumped high into the atmosphere caused temperatures to drop around the world for years afterwards.

A 1980 black and white surveillance photo released by the U.S. Attorney’s Office.

Notorious Boston gangster James “Whitey” Bulger was killed Tuesday at a West Virginia prison, according to two people briefed on the situation.

The WV News website reported that a male inmate was slain overnight at the maximum security prison where Bulger was being held. A union official said a man had been killed, but he didn’t know who.

Bulger, who had been serving a life sentence for 11 murders, had recently landed at the federal prison in West Virginia after a quick stop at an Oklahoma City transfer site.

CINCINNATI – There’s a $240,000 settlement in the case of an 11-year-old black girl stunned by a Cincinnati police officer after she was spotted shoplifting in a grocery store and tried to run away.

The Cincinnati Enquirer reported Tuesday the city of Cincinnati will pay $220,000 and the Kroger Co. $20,000 to Donesha Gowdy. Use of the money will be monitored by probate court, and the city has also agreed to participate in a juvenile police problem-solving team.

Officer Kevin Brown, who also is black, was heard on body camera footage telling her: “Sweetheart, this is why there’s no grocery stores in the black community.” The jolt from the stun gun knocked the 90-pound girl onto the concrete parking lot and left her convulsing.

“We don’t know how long this is going to hold up, but the consumer is bullish on the outlook and this means the economy is going to continue to advance in this long economic expansion from the last recession,” said Chris Rupkey, chief economist at MUFG in New York.

President Donald Trump said he will have tent cities built at the southern border in order to stop the entry of migrant caravans traveling toward the U.S. border from Central America.

Trump previously warned the migrants to turn around, saying the United States won’t accept their illegal border crossing. He’s even sent about 3,000 troops to help the Border Patrol stop illegal entrants and plans to send about 4,200 more.

Laura Ingraham travels to the White House for an exclusive interview with President Trump, getting his thoughts on the migrant caravan, potential 2020 opponents, and battling ‘fake news’.

The violence in recent weeks comes amid more than 600 attacks and acts of extreme harassment from rabid leftists, and calls for violence and harassment of Trump supporters from prominent Democrats from Congresswoman Maxine Waters and Eric Holder.

Don Lemon: ‘The Biggest Terror Threat in This Country Is White Men’

He added, “So, we have to stop demonizing people and realize the biggest terror threat in this country is white men, most of them radicalized to the right. And we have to start doing something about them.

Character actor James Cromwell was honored at the fourth annual Carney Awards, where he used his platform to call for change in the United States and warn of violence if President Trump and his allies remain in office.

Speaking to Variety at the event, he warned of the turn that he sees America taking and cautioned there will be “blood in the streets” if Republicans remain in control.

CLAIRE MCCASKILL FORCED TO GIVE EXAMPLES OF ‘CRAZY DEMOCRATS’

“The crazy Democrats are people who walk into restaurants and scream at elected officials’ faces,” McCaskill explained.

“The crazy Democrats are … We have a state Senator here in Missouri that actually advocated for the assassination of President Trump. That’s a crazy Democrat.”

Nolte: From CNN to the DNC – All the Media and Democrat Connections to Louis Farrakhan

While CNN, NBC News, and the Democrat National Committee continue to hide their own connections to one of the most rabid anti-Semites this country has ever produced, in turn, they lie about Trump and the terrorist who murdered 11 innocent people.

There is no connection whatsoever between Trump or anyone in his administration with anti-Semites or anti-Semitism, but…

Here is a list of those media organizations and elected Democrats who associate with Farrakhan.

Project Veritas Action Fund has released undercover video from current Congresswoman and US Senate candidate Kyrsten Sinema’s campaign, exposing the campaign’s belief that to win in Arizona, Sinema must appear more moderate than she really is, and hide her progressive views from voters in the process.

Sinema Campaign Staff Says Her Comments in Video were “Glib”

Staffers for US Senate candidate Kyrsten Sinema claim she tries to appear more moderate than she actually is, and intentionally hides her progressive views from Arizona voters – especially those on the Second Amendment and an “assault weapons” ban.

Participants not deterred by President Trump’s warnings as the movement gains steam; Griff Jenkins reports from alongside the caravan in Oaxaca, Mexico.

The policy, which stems from a disputed but long-recognized interpretation of the 14th Amendment, has given rise to what Trump considers abuse of the immigration system. Trump told “Axios on HBO” that the U.S. is the only country in the world “where a person comes in and has a baby, and the baby is essentially a citizen of the United States … with all of those benefits.”

South Carolina Republican Sen. Lindsey Graham came out in strong support of President Donald Trump’s plan to end birthright citizenship, even suggesting that he would introduce legislation toward that end.

Graham, who has been traveling around the country in support of Republican candidates ahead of next Tuesday’s midterm elections, delivered his support via Twitter on Tuesday morning. 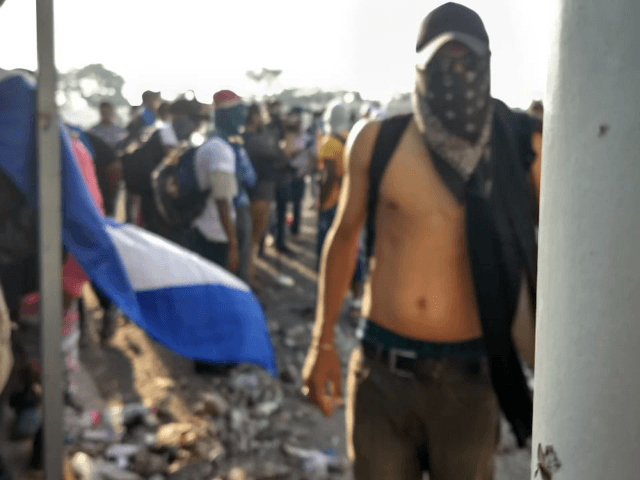 Due to the violent nature of the protest, authorities in both Mexico and Guatemala are working to identify the individuals who are believed behind the clashes and those preparing the improvised incendiary devices, said Mexico’s Secretary of the Interior Alfredo Navarrete Prida.

The official also confirmed that in the most recent clash, some of the suspects carried firearms and Molotov cocktails.

Mexican Interior Secretary Alfonso Navarrete defended his country after Honduran man from the caravan died during an altercation with Guatemalan and Mexican police, saying the police were attacked with “stones, firecrackers, and glass bottles.” He also said some of the attackers were carrying firearms and gasoline bombs.

The unidentified 26-year-old Honduran man was killed by a rubber bullet after migrants clashed with authorities on a bridge on the border of Mexico and Guatemala. The migrants broke down a metal police barrier and firefighters said dozens of people were injured.

Asylum requests overwhelm US immigration system: A look at the numbers

A recent explosion in asylum requests from immigrants facing deportation has overwhelmed U.S. courts and denial of the requests does little to keep illegal immigrants out, according to federal statistics.

Migrants are entitled under both U.S. and international law to apply for asylum. But there already is a bottleneck of would-be asylum seekers waiting at some U.S. border crossings to make their claims, some waiting as long as five weeks. For others, the process could even take years.

Read on for a closer look at immigration, by the numbers.

China’s first fixed-wing aircraft for polar flight Snow Eagle 601 taxies after its landing on Jan. 9, 2017 at the airport of Kunlun Station in Antarctica. (Xinhua via Getty Images)

China only has one fixed-wing plane that can fly to polar regions, and it can carry up to 18 passengers, according to the South China Morning Post. The aircraft also has to rely on Russian airports to take off and land.

But the construction of a new permanent airport in Antarctica with multiple runways appears to also be part of a broader strategy for the South Pole.

In the Ministry of Science and Technology Daily’s newspaper, an unnamed person quoted as a government insider said the airfield would be for more than just scientific research.

At least 10 dead after violent storms, flooding slam into Italy

A partially sunken boat is seen at sea a day after a storm washed up several boats, in Rapallo, northern Italy, Tuesday, Oct. 30, 2018. (AP Photo/Antonio Calanni)

Many of the deaths were due to falling trees crashing down on cars or passers-by, but they also included a woman who was buried by mud when a landslide invaded her home near Trento in northern Italy and a man who was slammed against rocks while windsurfing in Emilia-Romagna. The other fatalities occurred in Naples, Liguria, and Lazio.

LAGOS, Nigeria — Nigeria’s main Shiite Muslim movement says Nigerian troops shot and killed at least 27 of its members during a procession to the capital of Abuja.

Islamic Movement of Nigeria spokesman Ibrahim Musa said six people were killed on Saturday and another 21 on Monday.

Nigeria’s military said it killed six people and that the Shiite protesters fired first at soldiers.

Musa said Tuesday that many members were taking part in a religious procession, which coincided with a protest calling for the release of their movement’s pro-Iran leader, Ibrahim Zakzaky.

Taliban: 5 freed from US military prison now in Qatar office

They will now be among Taliban representatives negotiating for peace in Afghanistan, a sign some negotiators in Kabul say indicates the Taliban’s desire for a peace pact.

Others fear the five, all of whom were close to the insurgent group’s founder and hard-line leader Mullah Mohammed Omar, bring with them the same ultra-conservative interpretation of Islam that characterized the group’s five-year rule that ended in 2001 with the U.S.-led invasion.

The Russian Navy plans to test missiles in international waters off Norway’s coast this week, Norwegian and NATO officials say, as the Western military alliance conducts its largest military exercise since the end of the Cold War.

“Russia has a sizable presence in the north, also off Norway,” Stoltenberg told the Norwegian news agency NTB

Tucker: How the left uses tragedy to control free speech

Scalise: We need to confront evil and hatred with unity

‘This is a time for us all to stand together,’ the House majority whip tells ‘America’s Newsroom’ after the Pittsburgh synagogue shooting.

Trump Derangement Syndrome and the Fog of Lies | The Andrew Klavan Show Ep. 601

Americans have to look through the hatred to see one another clearly. David Limbaugh on the resurrection.