Lots of other News and Headlines besides Hurricane Harvey,  praying for Texas though. Get caught up In The News, World News, Politics, Commentary/Opinion and more.

HOUSTON (AP) — “Officials released more water from Houston-area reservoirs overwhelmed by Harvey early Monday in a move aimed at protecting the city’s downtown from devastating floods but that could still endanger thousands of homes, even as the nation’s fourth-largest city anticipated more rain.

Harvey, which made landfall late Friday as a Category 4 hurricane and has lingered just off the coast dropping heavy rain as a tropical storm, sent devastating floods pouring into Houston on Sunday. The rising water chased thousands of people to rooftops or higher ground and overwhelmed rescuers who could not keep up with the constant calls for help.” More here.> Officials act to protect downtown Houston from Harvey floods

“A ‘news story’ about an incorrect ACLU statement regarding border patrol checkpoints during Hurricane Harvey illustrates why Americans hate the media.”

“In southeast Texas, a humanitarian and economic catastrophe is underway. The National Weather Service has called Hurricane Harvey and the ensuing tropical storm “unprecedented” and “beyond anything experienced.” Flooding in some parts of Houston have reached 500-year floodplain levels, leaving thousands displaced or still stranded in their homes. But that hasn’t stopped the mainstream media from turning the disaster into a political talking point attacking the Trump administration.

On Friday, the American Civil Liberties Union released a grossly inaccurate and inflammatory statement in response to the unremarkable news that the U.S. Customs and Border Patrol would not close any internal checkpoints in Texas during the hurricane.” More here.> Fake News Claiming Border Checkpoints During Hurricane Harvey Is Why Americans Hate The Media

But for the family of Savanna LaFontaine-Greywind, a 20-year-old Fargo, N.D. woman who disappeared earlier this month at eight-months pregnant, the joy of meeting her newborn baby was mixed with dread.

Although her baby was alive—discovered at the apartment where Greywind was last seen alive, police say—authorities, family and a community searching up and down for clues still couldn’t find the baby’s mother, who vanished August 19, according to the Fargo Forum.

That mystery came to a tragic end on Sunday, police say, when two kayakers stumbled on a body wrapped in plastic along a nearby river. The body was hung on a log, not far from where searchers were combing a nearby farmstead looking for leads.” More here.> She vanished 8-months pregnant. Police found a living newborn—and tragedy, they say

The Health and Human Services inspector general’s office was issuing an “early alert” Monday on its findings from a large sampling of cases in 33 states. Investigators say Medicare needs to take corrective action right away.” More here.>  Abuse in nursing homes unreported despite law 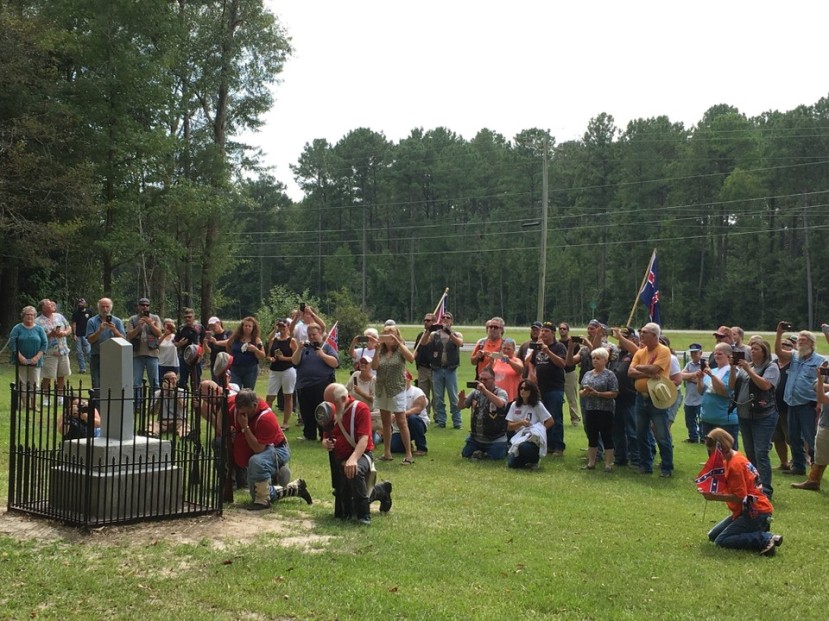 The modest stone marker commemorates the “unknown Confederate soldiers” who died in the Civil War but have been forgotten by history, particularly those from Crenshaw County and the surrounding area.

Organizers barred AL.com from bringing video cameras and cameras into the event, so all photos were taken with a cellphone. (Connor Sheets | csheets@al.com)

The memorial now stands in a confederate memorial park first opened in May 2015 on private land in an unincorporated area next to Dry Creek RV Park about three miles north of Brantley. It sits among existing monuments, replica cannons and tall flagpoles flying Confederate and other flags.” More here.> New Confederate memorial unveiled in Alabama

A replica of America’s Liberty Bell tolled three times at the eight-foot tall statue of King was unveiled Monday.

Thousands had gathered in Berkeley in response to a planned anti-Marxism protest that was scrapped amid concerns that participants may be attacked.

Six people suffered injuries in the ensuing melee, with two people getting hospitalized and one police officer suffering an injury while making an arrest.” More here.> Anarchists swarmed a protest in Berkeley and attacked Trump supporters

VA to pay Iowa veteran $550,000 to settle suit over treatment

VA under 3 investigations over report of rushed, botched radiology scans

NEW DELHI (AP) — “India and China have agreed to pull back their troops from a face-off in the high Himalayas where China, India and Bhutan meet, signaling a thaw in the monthslong standoff, India’s government said Monday.

India’s Ministry of External Affairs said India and China had diplomatic exchanges in recent weeks over the situation on Doklam plateau in the eastern Himalayas and both had agreed to “go back to the status quo” before the standoff.” More here.> India, China to pull back troops from border confrontation

“A white, Christian, five-year-old girl has been forced to live with Muslim foster carers who removed her cross, encouraged her to learn Arabic, and told her European women were alcoholics.

The five-year-old girl was put into the foster care system by scandal-ridden Tower Hamlets borough council, and has spent six months in two Muslim households against the parents’ wishes, reports The Times.

In local authority reports seen by the newspaper, a social services worker describes the sobbing child begging to not be returned to the foster home, saying “they don’t speak English”.

Another report, which describes the girl as “very distressed”, reads that the girl was not allowed to eat a carbonara meal because it had bacon in it (forbidden in Islam), and recorded claims she had her necklace and Christian cross pendant removed by one carer, and was allegedly encouraged to learn Arabic.” More here.> Christian Five-Year-Old Girl Forced into Muslim Foster Care Has Cross Removed, Told to Learn Arabic

“A male nurse in Germany who was convicted of killing patients with overdoses of heart medication is now believed to have killed at least 86 people.

German investigators on Monday said that the actual death toll claimed by Niels Hoegel, now 40, may actually be even larger.

Hoegel was convicted in 2015 of two murders and two attempted murders at a hospital in Delmenhorst, a town in northwestern Germany.” More here.> German police believe a male nurse killed at least 86 people

“The latest on the effort by Guatemalan President Jimmy Morales to expel the head of a U.N. anti-corruption agency (all times local):

Indigenous groups in Guatemala are blocking a major interchange on the Inter-American Highway to protest the president’s attempt to expel the head of U.N. anti-corruption commission that has been investigating graft in the country.

The indigenous mayor of Solola in south-central Guatemala said Monday that the highway is being blocked at Los Encuentros to show support for commission head Ivan Velasquez. Mayor Tomas Saloj said the demonstration is also a message against corruption.” More here.> The Latest: Guatemala indigenous protest to back UN official

WASHINGTON (AP) — “The Latest on the Trump administration’s plan to lift restrictions on surplus military gear to police departments (all times local):

Attorney General Jeff Sessions is announcing a plan to lift restrictions on surplus military equipment that can be passed on to police.

It’s a step that civil liberties groups fear will lead to more violent confrontations among police and protesters. But the Trump administration believes the program that supplies grenade launchers and high-caliber weapons to local law enforcement agencies is necessary for public safety.” More here.> The Latest: AG: Trump ends limits on military gear for cops

WASHINGTON (AP) — “President Donald Trump has been showcasing the federal government’s response to Harvey on Twitter and praising the spirit of Texans as they cope with the storm.

Trump plans to visit the state on Tuesday.” More here.> Trump praises spirit of Texans as they cope with Harvey

The Latest: First lady will join Trump on Texas trip

WASHINGTON (Reuters) – “President Donald Trump said on Monday he hoped a government shutdown would not be necessary over his demand that the U.S. Congress fund his proposed wall along the southern border with Mexico.

At a news conference with visiting Finnish President Sauli Niinisto, Trump also said Mexico may pay for the wall by reimbursement. Mexico has adamantly said it will not pay for the wall.” More here.> Trump hopes government shutdown won’t be necessary over wall funding

President Trump pardoned Arpaio, one of his early supporters and a controversial immigration hardliner, last Friday.

“I’m sure getting a lot of people around the state asking me,” he added of challenging Flake, a vocal critic of Trump’s.” More here.> Newly pardoned Joe Arpaio said he may challenge Jeff Flake for his Senate seat

If you need proof that the line between science and politics has been irrevocably erased, look no further than the September edition of Scientific American.

In a special issue entitled “Sex and Gender,” the magazine purloins the progressive political agenda and attempts to give it a scientific mooring even when none exists. It represents a wholesale retreat from the principle that science should be apolitical, further jeopardizing the integrity of the scientific establishment and potentially inflicting real harm as it chooses to promote identity politics over solid science.

SA’s opening salvo is an editorial with the headline, “Why the New Science of Sex & Gender Matters for Everyone.” The piece is astonishing not just because it’s poorly written and ill-conceived—one would expect more from such smart people—but also because it offers no evidence to back up its claim there is “new science” on sex and gender. Here’s how it begins:” More here.> Scientific American’s Transgenderism Issue Only Delegitimizes Science

Apple, J.P. Morgan and the Southern Poverty Law Center’s ‘hate list’: What are gifts to the SPLC really telling customers?

Your soul needs these cute babies laughing at cute dogs